Against the Raging River 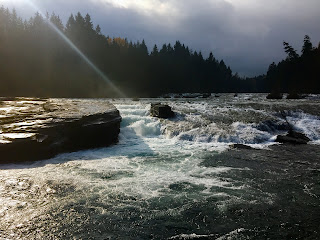 Look deep into nature, and then you will understand everything better.
Albert Einstein

This time of year the salmon are spawning on the Pacific west coast.  It is late in the season and the strongest of all the mother salmon are fighting their way up rivers and streams, miles from the ocean, where only the toughest are able to swim.  The rainy season has come and the water rages towards the ocean with a force that would wash even the toughest swimmer downstream.

The higher upstream they swim, the harder it gets.  Their numbers dwindle in proportion to their strength.  They jump from calm pools to surging rapids, often getting washed back downstream before gathering the energy to try again.  Many times they try to ascend the ladders in the wrong direction, losing momentum as they are washed back into the unforgiving river.

By the time these salmon reach the place where they will spawn, releasing the eggs that they have been carrying for many weeks and many many miles, they will be nearing the end of their lives.  Their bodies will already be decomposing.  They will have given all that they have, all that they are, to ensure the survival of their species.

These valiant fish don't question their purpose.  They are guided by a primal instinct that is stronger that the current with a sense of purpose that comes from outside themselves.  They don't look for the easy way, searching for a comfortable pool in which to float contentedly until next season.  Next season will be too late.  They swim upstream because that is what they were created to do.  The very survival of their species depends on these mommy fish doing exactly what they were created to do.

Do you ever feel like a spawning salmon? Swimming upstream, gathering all your strength to make the next leap, and then finding it wasn't quite right or you just weren't strong enough, getting washed back downstream only to reassess...and try again.  Sometimes you need to gather more strength, sometimes you need to chose a new path upstream.  Don't question your purpose.  Gather your strength and do what your heart tells you you need to do.  The surging stream doesn't stop.  It will keep coming season after season, year after year.

You were created for this.

You were designed to swim further up that river than you ever thought possible.