On the Frozen Falcon, Winter Running, and the Bliss of Mono-tasking 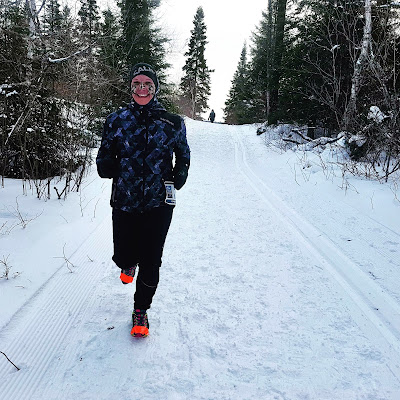 Recently I did something crazy, at least something I consider crazy.  I ran in the inaugural Frozen Falcon 8 Hour Endurance Run.  My friend Joel dreamed up this looped course race which was held at the Falcon Lake Ski Resort, Manitoba, Canada in early February.

I'm not really fond of looped timed courses and I'm definitely not fond of winter running. This is my third winter of running in Manitoba and I admit that running in temperatures below -25C + windchill still intimidates me.  I entered the FF to prove to myself that I could do a winter ultra, and that I could do it well.  I knew it would be cold, but I was counting on my training experience, a full arsenal of bio/gear hacks, and advice from friends to get me through. 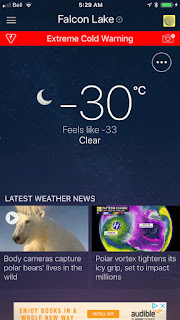 I was not counting on seeing friends post screen shots of "Severe Winter Weather Warnings" the night before the race predicting temperatures up to -32C with -40C wind chill.  At those temperatures, things freeze fast.  Water, gels, skin, wet clothing, eyelashes, electronics, my butt.  It all turns to ice in a matter of minutes.

As I packed my gear I fought off a mild panic attack as I questioned my choice of clothing for the day.  I hadn't even been this stressed out before the Zion 100!  My friend Scott (who had finished the Arrowhead 135 in Minnesota a few days previously) talked me down and made me promise NOT to overdress, NOT to wear a hard shell jacket because it traps moisture, and not to freak out.  To be truthful, I felt rather silly stressing out about an 8 hour run to someone who had just done 135 miles, so I did some meditative breathing, reminded myself that they were only 4 mile loops, and went to bed.  Everything is relative.

The 2 hour drive to the race start the next morning gave me time to focus.  As the sun came up, I noticed that it was shining straight up.  No soft diffused glow, but more like a flashlight beam straight up into the sky.  I had never seen that before.  As I drove out of cell range into the middle of nowhere, the temperature gauge on the truck read -34C.  Nice.  At least if I crashed I had everything I needed to run to the nearest town for help! lol

When I arrived at Falcon Lake I quickly changed into my race clothes at the last minute so they would be as dry as possible, taped my face up with Rock Tape (to avoid frostbite), and joined the huddle of 50 crazy runners waiting to start the race.  The RD Joel announced a few minutes to start and then stood inside the lodge, continuing to count down.  It was so cold that no one wanted to stand still outside at all, so I joked that this would now be known as the only ultra that starts indoors!  With 30 seconds to spare, we ventured outside and started our 8 hour adventure. 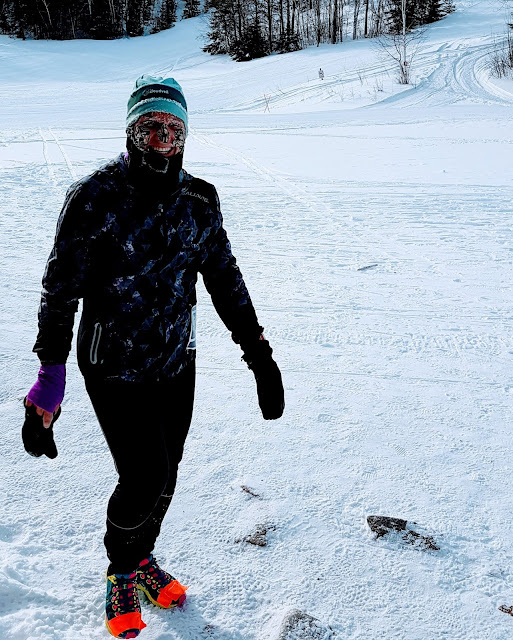 Although gaining popularity, ultra running is still very much a fringe sport.  And winter ultra running is even more fringe, as Scott says (although he's part of a crew that runs 135-160 miles in the winter).  With only a few exceptions, I knew everyone out there, including racers and volunteers. What a great community of runners we are!  Never in a million years would I have predicted a fews ago that I'd be running a winter ultra...but there I was!

As I began to run up the ski hill, I reviewed my race strategy.  It was simple.  Drink often to keep my water from freezing and to avoid dehydration.  Change base and mid layers at half way point.  Don't stop.  Don't freeze anything important.

Which leads me to comment on the lost art of mono-tasking.  As a physiotherapist, business owner and mom, I have perfected the art of multitasking over the last few decades.  I have gotten very good at doing many things at once to the point that it has become increasingly hard to focus on just one task.  One of the things that draws me to ultra running (and seeking out that elusive flow state) is that I only have to do one thing.  When I put on my running shoes, all those layers strip away and all I have to do is run.  Sure, I have to drink, eat, monitor the feedback my body is giving me, stay on course.  But running is really the most simple, innately purely human thing one can do. 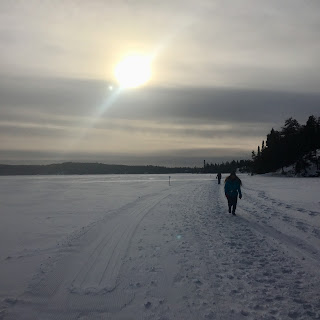 Winter running takes this to a whole new level.  When it's frigidly cold outside, everyone around you is covered in face masks and 3 layers of clothing.  During the FF, I had no idea who was running around me, and it took too much energy to talk or try to hear through all the layers.  My electronics froze despite being glued to my body, so no listening to music until I thawed them out later on, and if I didn't keep moving, I got very cold very fast. Even stopping to drink, which required unzipping and digging out my insulted water bottle, was something I did as little as possible.  This ended up being every 20 min.

Really, ALL I had to do was keep moving and run.  It was so liberating!  Under my frosty eyelashes, I was in my own little frozen world, and I got so deep into the zone that I found myself getting annoyed when I had to pop into the lodge every loop to check in because it messed up my flow.

All good things must come to an end however, and all the footsteps in the snow over those loops chewed it up pretty good by mid day.  It's crazy to say that I really wasn't cold at all, largely due to the fact that I had to work so hard to run in mashed potato-like snow and climb hills.  The crummy footing wrecked havoc on my hamstring that I thought had recovered fully from an injury last summer.  Guess not.  I decided to pull the pin at 29 miles and save my leg to run another day.

I have to say that my Salming gear performed extremely well, especially my AMAZING Run Fusion jacket.  It is paper thin and proved itself as nothing short of magic.  I remained bone dry right to my base layer the whole day despite working REALLY hard in some sections and sweating profusely.  Thanks Scott for not letting me wear a hard shell and thanks Salming for dressing me in kick ass Swedish clothing that stands the test of our Canadian winter! 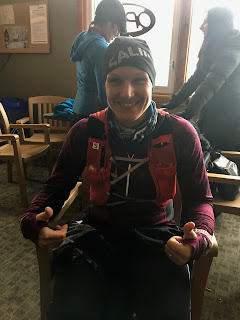 After I finished running and my phone thawed out, I noticed a text from my husband asking me to call home.  He NEVER asks me to call home mid race.  I feared a serious emergency and called as soon as I could.  He simply wanted to make sure I was ok.

My husband doesn't worry about me, and that suits me just fine because then I don't have to worry about him worrying about me.  Even when I used to run with the cougars and bears in BC, even during Fat Dog 70 and Zion 100, even when he didn't hear from me for 2 days after Grand Canyon 50 due to lack of cell service --- I would get a motivational text, but never a request to call home.  He trusts me to come home safe and sound, and knows I need to completely disconnect while I'm out on my adventures.

This time he was worried.  Hmm.  Ultra running in southern Manitoba may not have big mountains or scary animals (usually), rocky cliffs or nasty river crossings, but it does have winter.

Thanks Joel for creating an awesome race where I could (barely) preserve my self respect so close to home!