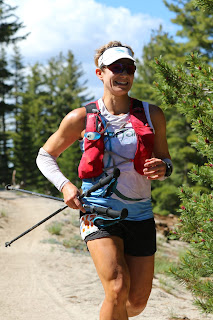 It was somewhere between Snow Valley Peak and Spooner Summit on the Tahoe Rim Trail that I broke out of a trance and started waxing philosophical.  Twelve hours into the Tahoe Rim Trail 100 I was running with a few women down some flowing single track salted with a few rocks to playfully bounce off and surrounded by fields of yellow wildflowers. It was idyllic. As often happens when in a deep state of flow, my mind goes to distant places and returns with incredible clarity.

As we chatted about the beauty of the trail and the coming challenges of the night ahead, I found myself quoting Marianne Williamson to the lady runner ahead of me.


I continued...”when you have the courage to admit that you have power you have the responsibility to honour it.”  I had always thought my biggest fear was inadequacy. Over the last year I’ve finally realized that fearing inadequacy was actually my safe place. Allowing myself to be powerful was actually much much scarier.

Have you ever been told you’re too much? I have.

So many people worry about not being enough. Sometimes I worry about that, but it’s rare...and usually only the week for a big race.  I’m constantly brushing the sharp edges of being too much. Sometimes I get cut up pretty badly.

Sometimes that advice has been wise and I’ve needed to appropriately learn to exercise restraint and decorum, but more often than not I’ve been left feeling smothered, caged in and exhausted from trying to govern the passion and excitement that I feel for the people or the things I love.

Last year I reached a breaking point and decided that I was done with that shit. I decided to let go of all the things and most importantly the person that made me feel deflated and powerless, a lesser version of me. It took all my remaining strength, but because I was already broken I couldn’t break any more. My transformation is still a work in progress but I’m finally feeling free in a way that I haven’t felt since I was a kid. The world is mine for the taking and I’ll be damned if I don’t shine as brightly as I bloody well want.

This is the truth I want my kids to know...

You are your mother’s child. More importantly you are God’s child. Your awesomeness is your birthright. Always remember who you are.

When you live big, there will be people who will be intimidated by you, threatened by you, jealous of you...and they will try to minimize you in an attempt to elevate themselves. Sometimes they will be the people who claim to love you most.

If anyone tells you you’re too much, wish them well in their mediocrity and let them go before they steel your power.

Hold onto your f*^&ing power.
Own your awesome my child, and the world will be yours.

Bounce HARD my friends.
Posted by Kim at 21:06 No comments: