Lessons in Patience and Humility 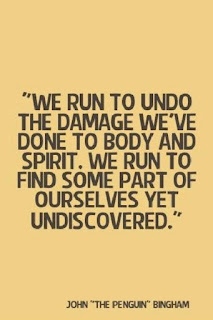 A central personal goal of my ultramarathon/running journey has been learning lessons about running and about myself.  I am frequently asked to give advice as a physio about returning to running post injury or after a long absence from running.  I know all the theory, I've coached and advised many many people as they build for the first time or after injury.  I preach patience, being cognitive rather than emotional about your plan, being realistic.  I admit I have often likely sounded a little nonchalant about it, not understanding personally how hard that really is.  Now I know.

As aforementioned in a previous post, after training hard all winter and spring, I took some time off this summer.  I was forced not to run a single step for 4 weeks due to a medical issue (thankfully temporary).  That combined with a cross country move meant that my training suffered.  Time off isn't a bad thing. I've been running and training for one race or another for the past 3 years with no significant time off other than yearly periodization, with my longest break from running being 6 days.   I always maintain a good base, but I was tired after Miwok, so it was good to give my body a rest from running.

When the 4 weeks were up and we were settled in our new house, I was more than ready to go.  I had biked and power walked but I wanted to run!  Mentally I thought I could run all day.  Physically, I was in for a wake up call.

I trotted out of the house ready for a nice easy 10K.  I was SO EXCITED!  First I noticed my legs didn't feel right.  Then I started breathing heavily at a pace that used to be zone 1 and was now more like zone 3.  By 8K I noticed a small niggle in my IT band.  At 10K I was euphoric but exhausted and wondering who's body I was inhabiting.  Despite what I know cognitively, I foolishly thought I could just run out the door and pick up where I left off.  I told myself that I needed to be cautious and careful, but if I was really deeply honest with myself - I didn't think I needed to.  I managed 40K that first week and felt the slight warning signs of connective tissue stress in my achilles and ITB.  I am terrified of injury and that made me pay attention.

So I have been taking it slowly, following the 10% rule for increasing weekly mileage (although there is no solid research to support that arbitrary number that I know of).  I dug out the heart rate monitor and have been working on going slow, building my base back up again as if it were January.  I've even been a very good girl and have been strength training and working on my ABCD drills at least 3x/week.  My legs are coming back and my zone 1 pace going back down.  YAY!

Never in a million years did I think it would be this hard to come back from significant detraining.  Physically there is a formula that works and I know I'll get there.  But mentally, I have been humbled.  My pride had to be left at the door...again.  I am not known for my patience, which is why ultra running has been such a good character builder for me.

So to all those runners I have advised in the past: I'm sorry that I didn't truly get it.  I hope I gave you good advice and encouraged you despite my ignorance.  To those in the future: I've learned that taking a break and then rebuilding afterward is about more than what you are doing or not doing.  It's about who you are and how you define and value yourself through the process.  Rest assured - your body remembers.  If your desire is there and you are patient, you'll get there!
Posted by Kim at 11:41